Written by RetroGeek on 06 November 2019

Taking place between February 24th until the 1st of March, the 33rd ESL-backed SC2 event will also mark the 10th anniversary of the game as a leading title of the IEM Circuit.

StarCraft 2 is coming back to IEM Katowice with a massive tournament featuring a pool of 76 players and a prize pool of $400,000. Taking place between February 24th until the 1st of March, the 33rd ESL-backed SC2 event will also mark the 10th anniversary of the game as a leading title of the IEM Circuit.

Starcraft 2 is one of the oldest and most popular esports in history. Despite a lack of major tournaments or events, the title managed to retain a considerable and highly-engaged fanbase. The most recent StarCraft 2 major event – the 2019 WCS Global Finals offered a whooping $700,000 total prize pool and managed to attract an average of 35K viewers and a total of 1.5M hours watched.

The Intel Extreme Masters Katowice 2020 SC 2 tournament will see the 76 participants competing over 6 tournament days starting on February 24th. The participants will be divided as follows: 11 qualification slots will be seeded straight into the Round of 24 and will available for players from around the world. One other spot goes to the winner of the WCS global finals 2019. 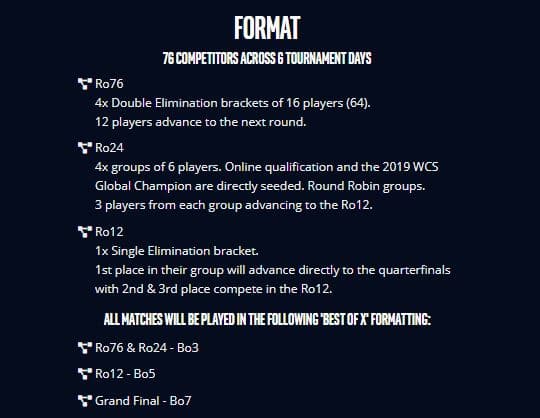 The remaining 64 players, chosen based on the WCS ranking, will be placed in 4 double-elimination brackets with the top 3 of each bracket joining the 12 players already qualified for the Ro24. The tournament winner will return home $150,000 richer.

“For ten years, StarCraft II has delivered some of the most legendary moments on our stages. Blizzard titles have always been a part of the Intel® Extreme Masters DNA, and legacy is something that’s incredibly important to us to maintain and develop. SC2 helps us cultivate a living thread back to the very first years of Intel Extreme Masters.”

Premium tickets to the StarCraft II tournament Feb 28 – Mar 1 will be available for ~ 130 $ and include a goodie bag, free drinks during the matches (only non-alcoholic, Spodek Arena only) and seating in the front row to guarantee a premium viewing experience.

The IEM Katowice esports tournaments are some of the biggest and most popular esports events of the year. Attracting thousands of fans and millions of viewers each year, the Intel Extreme Masters are organized by ESL at the legendary Spodek Arena in Poland. In 2019, over 173,000 fans attended the CSGO, Dota 2 and SC2 events while online online, more than 232 million viewers tuned to watch their favourite players and teams.

A great design, awesome odds and friendly welcome bonus!
Play
Live betting, own crypto and gamer-facing features
Play
Solid welcome bonus and traditional sportsbook!
Play
Tons of games to bet on and easy to use user interface!
Play
All product names, logos, and brands are property of their respective owners. All company, product and service names used in this website are for identification purposes only.
rendered (mm/dd/yyy):3/6/2021, 2:02:15 AM