Don your armor, gather your bannermen, sharpen your sword and get ready to step on the battlefields of Calradia – Mount & Blade II: Bannerlord is coming to Steam Early Access in March 2020.

Mount & Blade 2: Bannerlord, the long-awaited sequel to the medieval combat simulator and role-playing game Mount & Blade: Warband will be available for Early Access to Steam Players early next year. The announcement came from TaleWorlds Entertainment, the game’s developer, at Gamescom 2019.

Mount & Blade 2: Bannerlord will be set 210 years before Warband during the decline of the Calradic Empire covering the time frame when the main factions in Warband were being born. The game will expand, and hopefully improve, the open-ended sandbox gameplay of Warband that allows you to take the role of a medieval character that can fight, siege or barter his way in the world of Calradia.

Do you see your medieval self as a battle-hardened fighter, storming castles and villages? Or maybe you would like to play as a travelling merchant, amassing riches by exploiting the sandbox economy of the game? Regardless of how your 6th-century geek looks like, in Bannerlord, you can hack, bombard or barter your own path to victory.

Things you can do in Mount & Blade 2: Bannerlord

Hack, slash, smash or poke to your medieval heart’s desire
If you haven’t yet figured it out, the “Blade” in the Mount and Blade stands for all the sweet medieval dismembering available to you throughout the game. Dagger, Swords, Polearms, Maces – pick the weapon that corresponds your imagined battle style and poke, smash or slice away. Furthermore, for those of you who would rather jump straight into the gory action and skip the RPG element completely – Bannerlord offers several multiplayer modes such as Skirmish or Captain. 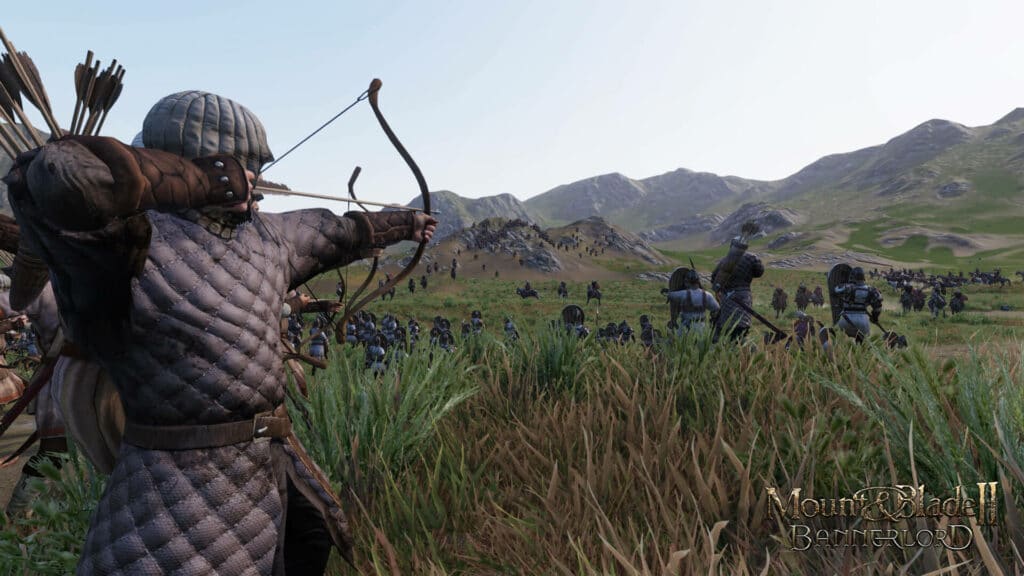 Skirmish is a 6 vs 6, player versus player game mode where you join five other players and battle across various scenarios and maps. Skirmish is an asymmetric game mode that features a varied amount of spawns depending on the quality of your class choices. In Skirmish you start with a set amount of points that they can spend to select a class for each spawn during a round. Depending on the class selected, you can have more or less respawns available.

Here’s a rough cut of the Skirmish mode in Mount & Blade 2: Bannerlord:

In Captain Mode the straight-on battle royale mode gets updated with an element of strategy. This Bannerlord multiplayer game mode pits two teams against each other in a player-vs-player battle, with each player having command of their own detachment of AI troops. There are no respawns available, but upon death you can choose to play as one of your soldiers.

Here’s a preview of the Captain mode in Mount & Blade 2: Bannerlord:

Turn every fortress, keep, town and village to rubble
As previous title, Bannerlord will feature siege battles, with hundreds of soldiers storming into castles supported by catapults and siege towers. What’s new is that when it comes to siege, the roles of players are no longer restricted to attacker / defender. Players can try to break the siege or use diplomacy skills and talk to the besiegers in the hope that they will allow you to pass through the siege lines unmolested in return for handing over the walls. Additionally, if you’re outside the besieged fortress, you can help by attacking the besiegers, harass their supply lines or simply try to break through their lines and reach the castle with reinforcements and supplies.

Barter, Bribe and Betray
Bannerlord is mainly about fighting an maiming but that doesn’t mean alternative gameplays are not available. Are your days as a sellsword numbered due to old age, artritis and the desire for a more steady source of income in a field with a somewhat smaller percentage of maim, mutilation or decapitation? Try the merchant life! Travel from village to village, buy low, sell high, invest in farms and workshops. Make use of in game events and turn anarchy to your advantage by being the first to bring grain to a starving town. Make sure to keep that sword sharp though…

And if the merchant life is not for you, then maybe a career as a diplomat might suit you better. Put your persuasion skills to use and turn a potential bloody outcome into a civilised agreement. Why fight for a castle when you could just talk your way into its coffers. Here’s what TaleWorlds said about the new Persuasion system:

“No medieval drama, from Shakespeare to the Game of Thrones, is complete without a few scenes of high-stakes negotiation. Although most of our development effort goes into battles and combat, we also want to offer players alternative gameplay. Be it a plot to betray a king, a dynastic marriage, or just a way to handle a thorny conflict between your bickering subjects, skilled persuaders can find solutions to solve problems and save a bit of wear-and-tear on their sword-edges.”

Craft the most awesome sword and name it
Why hack someone’s head with a random sword or shoot someone in the face with a crosboww when you could do it with your OWN sword or crossbow. Mount and Blade 2: Bannerlord will feature a crafting system that will allow gamers to craft their own family heirloom and name it. You know, because lots of people name their swords 🙂

Travel around Calradia, loot and purchase various weapon parts such as blades, pommels, handles, and grips and craft your very own weapon. Bannerlord will allow you to forge a finely-tuned killing machine to match your own prowess and complement your play-style. Or, if that sounds like work, just kill someone and take their sword.

When will Mount & Blade 2: Bannerlord Launch?

In development for over 7 years, the game currently sits in closed beta with only a handful of players having access to it. The March 2020 early access seem to point to either a late summer or early autumn 2020 release. If you’re eager to get a preview, the game will demo at Gamescom 2019.

A great design, awesome odds and friendly welcome bonus!
Play
Live betting, own crypto and gamer-facing features
Play
Solid welcome bonus and traditional sportsbook!
Play
Tons of games to bet on and easy to use user interface!
Play
All product names, logos, and brands are property of their respective owners. All company, product and service names used in this website are for identification purposes only.
rendered (mm/dd/yyy):6/22/2021, 10:01:15 AM