PUBG Global Series 2020 – Everything you need to know about PUBG‘s +$3.5M tournaments.

PUBG corp announced that PUBG Global Series 2020 or PGS will feature three event stops and a Grand Finals with a total prize pool distribution of at least $3.5M USD.

In a recent press release, PUBG corp announced that PUBG Global Series 2020 or PGS will feature three event stops and a Grand Finals with a total prize pool distribution of at least $3.5M USD.

The four PGS events will be hosted in major cities around the world in April, July, October and November, with the first one already being confirmed to take place in Berlin. The final event of 2020 is the PUBG Global Championship, with the first three events all serving as both major live events unto themselves and qualification tournaments for the PGC.

A total of 32 teams will compete at each of the three PGS events. The top four teams from the most recent global competition will automatically qualify for the next event.

The remaining 28 slots will be filled by teams who participate in regional qualifiers in one of the six regions, including Korea, China, Japan, Europe, Americas, and Asia Pacific.

The first event of the new PUBG Global Series, the PGS Berlin, will take place at Messe Berlin from March 31st to April 12th. Its Group Stage will take place on March 31st – April 3rd, followed by the Elimination Stage on April 4th – 5th, before culminating at the Grand Finals on April 10th – 12th.

The Regional Online Qualifier to earn slots at the PGS Berlin will start in February and be concluded in March. The qualifiers will feature both online and offline elements, and will no longer require competitors to reside in a specific location. 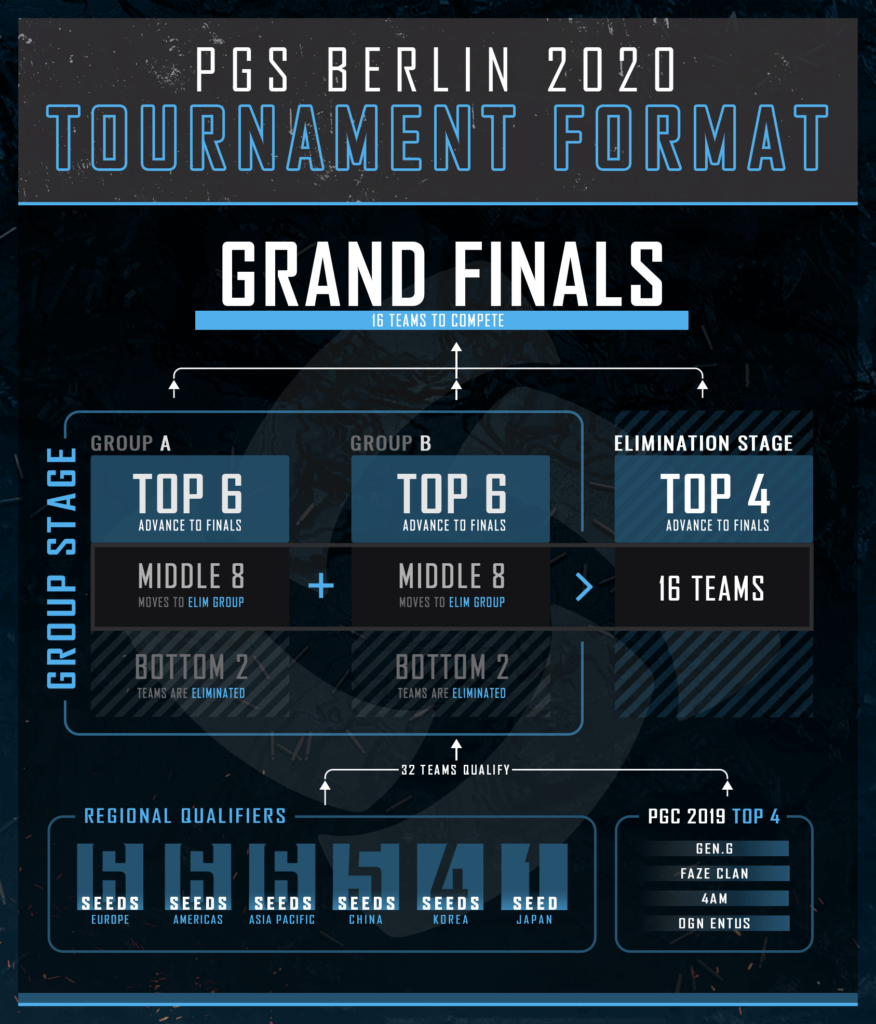 After last year’s success when PUBG was able to distribute more than $6 million USD in prize pool and crowdfunding to participating teams, in 2020 the developer aims to create an even more diversified revenue sharing program for participating teams.

Between prize pool and crowdfunding efforts, PUBG guarantees participating teams a minimum of $20,000 for each PGS event. The first three PGS events will feature a prize pool of $500,000 USD each, while PUBG Global Championship 2020 will award $2,000,000 USD.

What is the PUBG Global Championship?

The PUBG Global Championship 2020 represents the culmination of the 2020 season and will take place in November in an yet undisclosed location. To crown the 2020 PUBG World Champions, 16 teams will battle it out at PGC 2020. The top 4 teams from the 3rd PGS event will automatically qualify for PGC. The remaining 12 spots will be filled by the highest ranked teams based on the sum of points scored in the Grand Finals from all three PGS events.

Keep an eye on pubg.com for more info about the PUBG Global Championship 2020.

A great design, awesome odds and friendly welcome bonus!
Play
Live betting, own crypto and gamer-facing features
Play
Solid welcome bonus and traditional sportsbook!
Play
Tons of games to bet on and easy to use user interface!
Play
All product names, logos, and brands are property of their respective owners. All company, product and service names used in this website are for identification purposes only.
rendered (mm/dd/yyy):6/22/2021, 10:03:16 AM