Valve announced the release of the Viewer Pass, Team Stickers, and Player Stickers for the 2019 StarLadder Berlin Major. P

Valve announced the release of the Berlin Major Stickers containing the Viewer Pass, Team Stickers, and Player Stickers for the StarLadder Berlin Major with 50% of all the revenue from sales going towards the teams and players.

First introduced during the IEM Katowice 2019, the Viewer Pass allows CSGO fans wanting to celebrate one of the largest tournaments of the year to join in and receive access to exclusive challenges and in-game items such as unique graffiti, team stickers or player autographs. 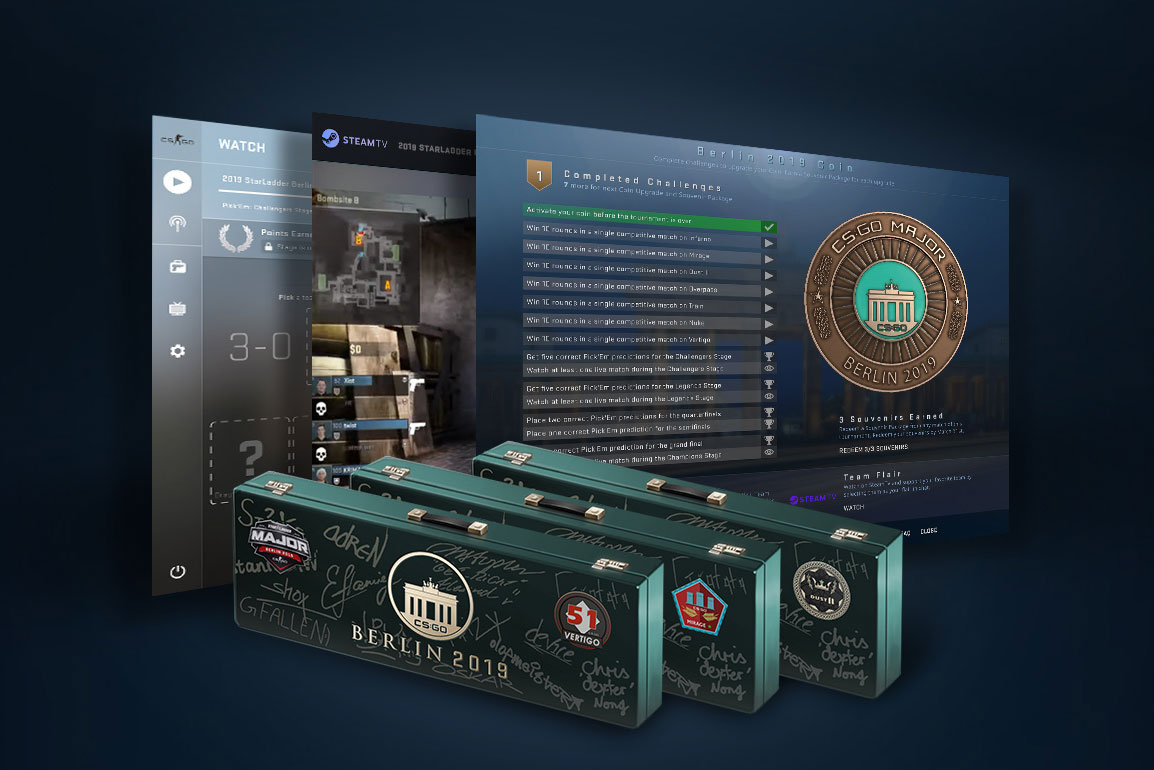 The Berlin 2019 Viewer Pass has sufferer a few modifications compared to the previous iteration, with players now being able to complete mission challenges and up[grade their Event Coin. Additionally, the event pass gives access to:

The moment you active the Viewer Pass, you’ll receive the Berlin 2019 Event Coin that you can upgrade by completing challenges, such as watching matches, playing the Berlin Pick’Em Challenge, and completing missions. Each upgrade of the Coin will unlock an additional Souvenir Token. You must completed eight (Silver), twelve (Gold), or all sixteen (Diamond) challenges to upgrade your Coin three times. Souvenir Tokens can be redeemed until September 30th.

If you want to test your prediction skills without any wagering requirements, join the in game Pick’em Challenges and predict which teams will advance to the next stage. Correct picks will give points towards upgrading your Event Coin. In the Challengers and Legends stages, you’ll have to pick 5 out of the 9 results correctly. You can complete up to 3 challenges for the Champions stage: set up your bracket and correctly pick at least 2 of the winning Quarter-finalists, at least one winning Semi-Finalist, and the winner of the Grand Final.

Want to show your support for your favourite esports team or player? Collect their stickers and place them on your weapon. During the event, you can buy exclusive Legends, Returning Challengers, or Minor Challengers Autograph and Team Stickers Capsules.

About the StarLadder Berlin Major

The StarLadder Berlin Major will take place between 23 August and 8 September at the Mercedes Benz Arena in Berlin, Germany. One of the largest CSGO events of the year, the tournament will feature 24 teams competing for a whooping $1,000,000 prize pool.

Astralis, FaZe Clan, NaVi, MIBR, Renegades, Ninjas in Pyjamas, ENCE are all considered favourites to win the tournament so you’re thinking about wagering on them don’t forget to check our CSGO Live Odds for the best stakes from online bookmakers.

A great design, awesome odds and friendly welcome bonus!
Play
Live betting, own crypto and gamer-facing features
Play
Solid welcome bonus and traditional sportsbook!
Play
Tons of games to bet on and easy to use user interface!
Play
All product names, logos, and brands are property of their respective owners. All company, product and service names used in this website are for identification purposes only.
rendered (mm/dd/yyy):6/22/2021, 7:24:22 AM